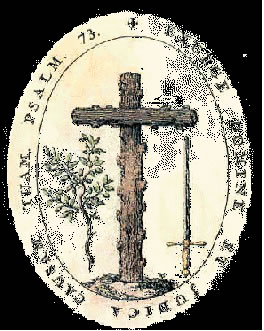 The seal of the Spanish Inquisition depicts the cross, the branch and the sword. From Enciclopedia Española 1571.

I define Christian hegemony as the everyday, pervasive, and systematic set of Christian values and beliefs, individuals and institutions that dominate all aspects of our society through the social, political, economic, and cultural power they wield. Nothing is unaffected by Christian hegemony (whether we are Christian or not) including our personal beliefs and values, our relationships to other people and to the natural environment, and our economic, political, education, health care, criminal/legal, housing, and other social systems.

Christian hegemony as a system of domination is complex, shifting, and operates through the agency of individuals, families, church communities, denominations, parachurch organizations, civil institutions, and through decisions made by members of the ruling class and power elite.

Christian hegemony benefits all Christians, all those raised Christian, and those passing as Christian. However the concentration of power, wealth, and privilege under Christian hegemony accumulates to the ruling class and the predominantly white male Christian power elite that serve its interests. All people who are not Christian, as well as most people who are, experience social, political, and economic exploitation, violence, cultural appropriation, marginalization, alienation and constant vulnerability from the dominance of Christian power and values in our society.

Christian hegemony operates on several levels. At one level is the internalization of dominant western Christian beliefs and values by individuals in our society. Another level is the power that individual preachers, ministers and priests have on people’s lives. Particular churches and some Christian denominations wield very significant political and economic power in our country. There is a vast network of parachurch organizations, general tax-supported non-profits such as hospitals, broadcasting networks, publishing houses, lobbying groups, and organizations like Focus on the Family, Prison Fellowship, The Family, World Mission, and thousands of others which wield influence in particular spheres of U.S. society and throughout the world. Another level of Christian dominance is within the power elite, the network of 7-10,000 predominantly white Christian men who control the largest and most powerful social, political, economic, and cultural institutions in the country. And finally there is the level which provides the foundation for all the others–the long and deep legacy of Christian ideas, values, practices, policies, icons, and texts that have been produced within dominant western Christianity over the centuries. That legacy continues to shape our language, culture, beliefs, and values and to frame public and foreign policy decisions.

Christian dominance has become so invisible that its manifestations appear to be secular, i.e. not religious. In this context, the phrase “secular Christian dominance” might be most appropriate, Christian hegemony under the guise of secularism. Of course, there are many forms of Christian fundamentalism which are anything but secular. Often fundamentalists want to create some kind of theocratic state. But the more mainstream, everyday way that dominant Christian values and institutions influence our lives and communities is less evident, although no less significant and certainly not limited to fundamentalists.