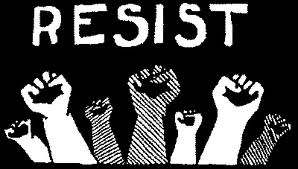 “Resistance is a plea for justice, a yearning for peace.”

Resistance can be understood as the many ways people oppose the dominance of those in authority and undermine their ability to carry out their agenda. It can take many forms. When the intent is genocide, survival itself is a form of resistance. Resistance is always present; hegemony is never total. [2]

This section is meant to highlight some of the multitude of ways that individuals, organizations, and peoples have been resisting Christian hegemony for the last 1700 years. For more stories and to better understand what Christian hegemony is and how it operates see my book Living in the Shadow of the Cross: Understanding and Resisting the Power and Privilege of Christian Hegemony (New Society, 2013).

Since resistance is a collective process, sharing stories of resistance should be as well. I encourage you to send me current and historical resistance stories so I can post them here to inspire others.

2.  For an excellent analysis of the arts of resistance see: James C. Scott. Domination and the Arts of Resistance: Hidden Transcripts. Yale, 1990 and James C. Scott. Weapons of the Weak: Everyday Forms of Peasant Resistance. Yale, 1987.

A SELECTION OF RESISTANCE STORIES:

> Not In Our Town

> Faithful America: An online community of Christians reclaiming Christianity from the religious right.

> West Point cadet speaks out against Christian dominance at the Academy

> The Osage resist colonization and missionaries

> Jewish Women and Resistance to Nazism