In Washington, DC. on September 23, 2015 Pope Francis canonized Father Junipero Serra as a saint. At the same time, outside of San Francisco’s Mission Dolores I stood with approximately 100 Native Americans and their allies gathered for a protest and prayer vigil to decry the Pope’s canonization of Serra.  We stood for the fifty different tribes in California who have condemned the sainthood being conferred that day.[1] 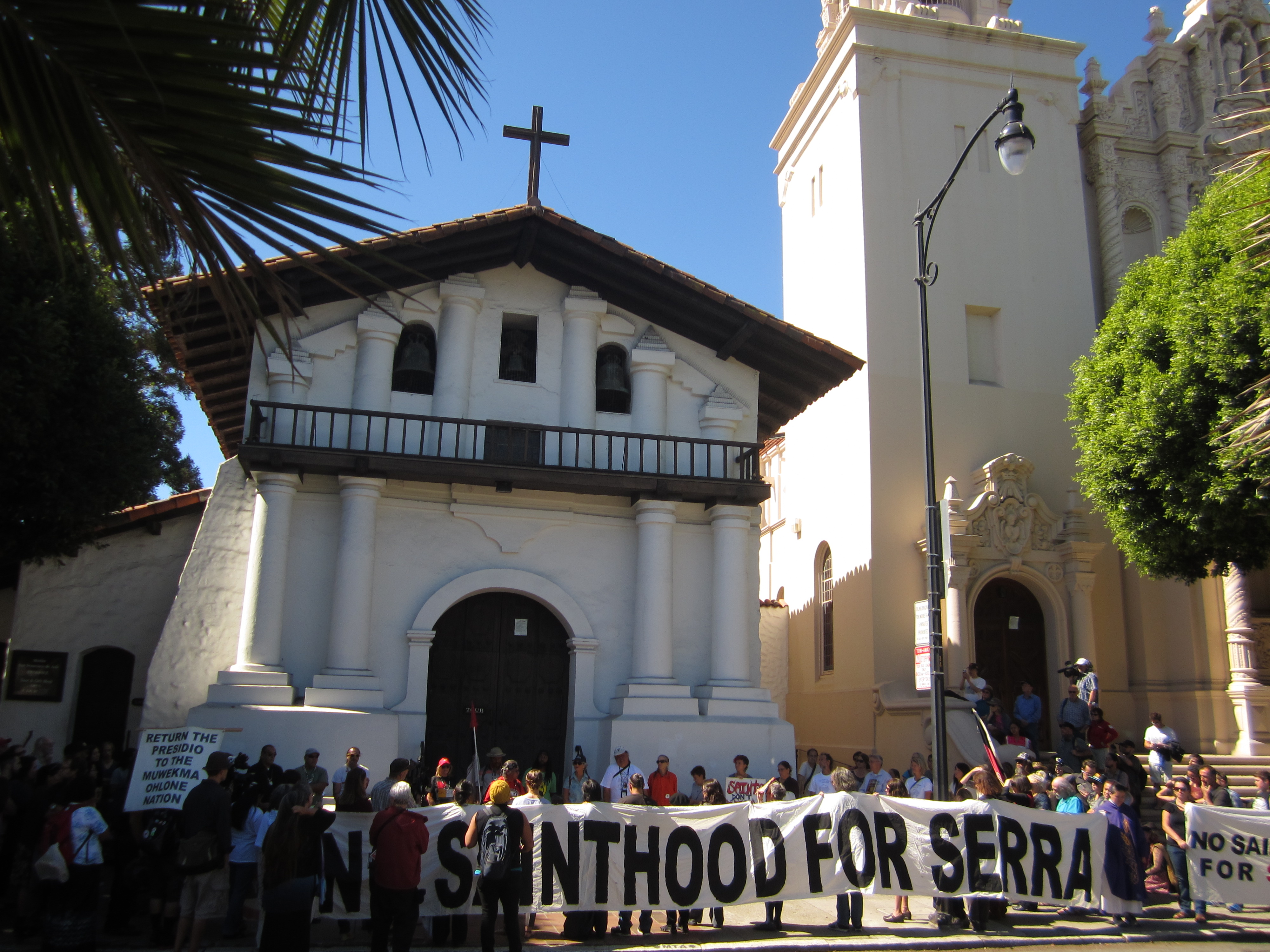 Despite the rosy image painted by the Catholic Church to cover up his reign of terror, Father Serra was a key figure in the destruction of Native communities from Baja to Northern California. He carried out the church’s policies established in the Papal Bulls of the 15th century (the Doctrine of Discovery) that gave Christian colonizers divine permission to dispossess, enslave, rape and kill anyone who resisted their efforts to claim land and resources and establish Christianity.

Father Junipero Serra, traveling north from Mexico with the Spanish Army, established a series of missions in which the military imprisoned Indigenous peoples. The missions were concentration camps. Soldiers indiscriminately rounded up Indians and brought them to the missions where they were enslaved, whipped, and tortured.  Large numbers died, many from diseases that they were vulnerable to because of harsh working conditions, constant punishment, malnourishment, crowded and filthy living conditions, and being cut off from community and culture. So many were starved or worked to death that the priests continually complained they did not have enough workers to grow food. Spanish soldiers raped Native women; children were separated from their parents; people were not allowed to speak their native languages, wear indigenous clothes, practice their cultural rituals, or to leave.  Running away was brutally punished—sometimes by Serra himself. Tens of thousands were killed as a result of this military/church alliance that exterminated entire Native peoples and cultures. “The Native American population of coastal California was reduced by some 90% during seventy years under the sole proprietorship of Serra’s mission system.”[2] Some of the soldiers and priests involved with the mission were so appalled by the level of violence that they spoke out against it. According to historian Alvin Josephy, what happened in California “was as close to genocide as any tribal people had faced, or would face, on the North American continent.”[3] Over 150,000 California Indians died under this system that Junípero Serra developed and supervised.  As just one example among hundreds, at the beginning of the mission period, from Monterey to San Francisco there were 30,000 Ohlone Indians. At the end of the mission period, there were less than 100.[4]
These are not claims or allegations—there is ample documentation by native peoples and by the church itself about what happened,[5] although the Catholic Church continues to justify the canonization of Father Serra.  And now this man, who referred to Indians as savages[6] and celebrated the deaths of Indian children as harvests for God, has been declared a saint by the Catholic Church.[7] This is the same Father Serra who collaborated with the Inquisition and at one time was an inquisitor himself. The same Father Serra whom Pope John Paul II beatified in 1988 describing him as “…. a shining example of Christian virtue and the missionary spirit.” Father Serra was indeed a perfect example of the missionary spirit that has pervaded the Catholic Church for centuries leaving an ongoing legacy of death and devastation throughout the world. To canonize this man is not only to bless his memory and hold him up for adulation but also to continue the history of lies, omissions, and disinformation by the church about its complicity with genocide and to reinforce its refusal to take accountability for past and current missionary practices. 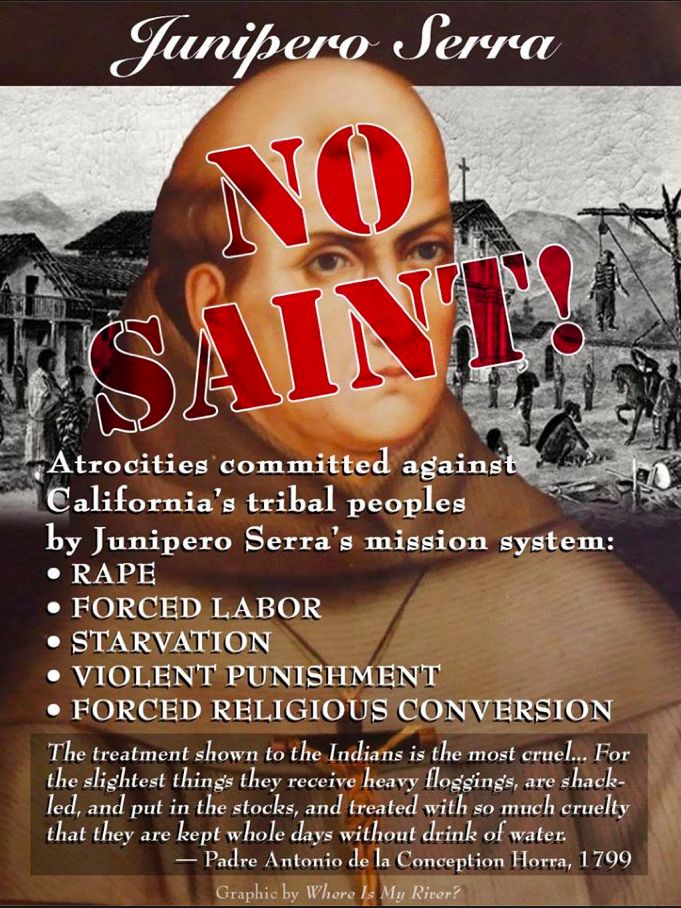 Pope Francis has garnered much praise for his speeches on climate change and poverty, but his actions have yet to match his rhetoric. He has not made changes in the church under his control. As far as we know, he has neither divested nor supported divestment of the church’s assets from fossil fuel companies.  He has not returned land to indigenous people nor opened up the coffers of the church to the poor. He has not pursued reparations for those sexually abused by Catholic priests or opened up Church records about the abusers. In fact he continues to protect them and allow some of them access to children.[8] He continues to deny women’s reproductive rights and allows the weight of the Catholic empire to fight against the complete access to health care, including reproductive rights that women and people who are LGBTTQ have a right to. In his canonization of Father Serra, Pope Francis has issued a slap in the face to indigenous people throughout the world, supporting not only the church’s historical leading role in genocide against them, but contributing to their ongoing colonization. As the old saying goes, actions speak louder than words.

Castillo, Elias. A Cross of Thorns: The Enslavement of California’s Indians by the Spanish Missions. Craven Street Books, 2014