The following article is by Cole Parke — activist, organizer, and scholar as well as LGBTQ and gender justice researcher at Political Research Associates. Cole does an excellent job of showing how dominant Christian leaders, denominations, and parachurch organizations such as think tanks and legal organizations work together to create and activate a national agenda. The article focuses on coordinated attacks against the transgender community by organizations also involved in anti-gay, anti-choice, and other campaigns. This article was originally published on Political Research Associates and is reposted here with permission.

TDOR 2014 AND THE RIGHT-WING ROOTS OF ANTI-TRANS VIOLENCE

Since 1999, Nov. 20th has been set aside as Transgender Day of Remembrance (TDOR). TDOR provides space to remember and honor those who have been killed due to anti-transgender hatred or prejudice. The annual event originated when trans activists and allies came together to mourn the loss of Rita Hester, a Black trans woman who was brutally murdered in Allston, Massachusetts on Nov. 28, 1998. Beyond a few transphobic mentions in the local media (the Boston Globe referred to Hester as “a man who sported long br 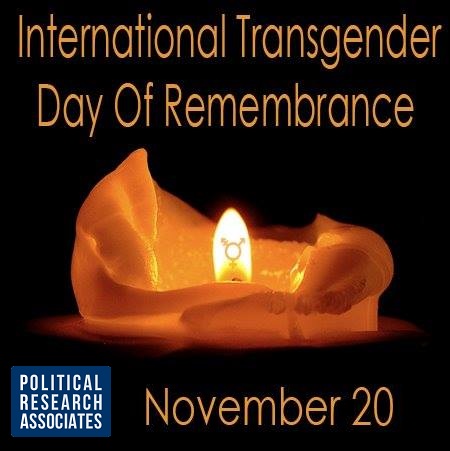 aids and preferred women’s clothes,” while the Boston Herald called her a “transvestite” and “a large man who lived as a woman”), her death garnered little attention, let alone outrage.

While significant legal advances have been made for the LGBTQ community in the 15 years since Hester’s murder, trans people continue to experience horrific and disproportionate rates of violence. As the official TDOR website states:

“We live in times more sensitive than ever to hatred based violence, especially since the events of September 11th. Yet even now, the deaths of those based on anti-transgender hatred or prejudice are largely ignored. Over the last decade, more than one person per month has died due to transgender-based hate or prejudice, regardless of any other factors in their lives. This trend shows no sign of abating.”

Yet most media outlets, policymakers, and even the mainstream LG(BTQ) movement, have a long history—that continues to this day—of marginalizing the experiences, contributions, and needs of transgender people and people of color. The 1969 Stonewall Riots—often considered a pivotal moment in LGBTQ history—are frequently claimed by White, gay men as a triumph of their own doing, even though it was primarily t 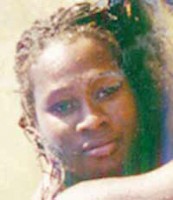 rans women of color and homeless youth who led the charge. And whereas Rita Hester’s murder in 1998 was largely ignored, the murder of Matthew Shepard—a young, White, gay man—just two weeks later prompted nationwide vigils and helped lead to the eventual passage of the Matthew Shepard and James Byrd, Jr. Hate Crimes Prevention Act in 2009. The legislation expanded the 1969 U.S. federal hate-crime law to include crimes motivated by a victim’s actual or perceived gender, sexual orientation, gender identity, or disability.

Indeed, disregard for the role of trans people and people of color has plagued the LGBTQ justice movement since its earliest days. Meanwhile, these are the members of our community who bear the brunt of the violence and oppression directed toward LGBTQ people.  In its annual report on hate-violence experienced by LGBTQ and HIV-affected persons in the United States, the National Coalition of Anti-Violence Programs (NCAVP) documented more than 2,000 incidents of anti-LGBTQ violence in 2013, and 18 hate-violence homicides. NCAVP’s findings also reflect the disproportionate impact of this violence: almost three-quarters (72%) of the  documented homicide victims were trans      women, and more than two-thirds (67%) were trans women of color.

TDOR interrupts this pattern of neglect, insisting that the LGBTQ movement—as well as our broader  communities—acknowledge and mourn these lives.

Who Are The Architects of Anti-Trans Violence?

To a certain extent, talking about violence against trans people as a “hate crime” abstracts it from any social or political context, and suggests that these attacks are isolated incidents caused by rogue individuals. As Kay Whitlock has argued in a PRA discussion paper:

“While the hate frame may be powerful in terms of increasing awareness and mobilizing opposition to the threatening, violent actions of individuals and small groups directed against targeted communities, it also, paradoxically, obscures the relationship of such violence to its systemic underpinnings […] It’s so much easier to place the blame for violence directed against entire groups on criminal misfits, loners, and crackpots than to challenge the unspoken public consensus that permits broader cultures and structures of violence to exist.”

And so we must acknowledge—and then challenge—the architects responsible for manufacturing and perpetuating a cultural climate that justifies violence against trans and gender nonconforming people.

Earlier this year, delegates at the Southern Baptist Convention’s annual meeting in June signed a “Declaration on Transgender Identity.” With 16-plus million members, SBC is the world’s largest Baptist denomination and the largest Protestant body in the United States (in terms of Christian organizations, only the Catholic Church manages to outnumber them). Consequently, SBC’s policy decisions carry tremendous influence.

Unfortunately, the declaration was far from affirming. It states that trans and intersex people are manifestations of “human fallenness” and “contrary to God’s design.” The resolution notes that SBC condemns “acts of abuse or bullying” (unlike many of the document’s other proclamations, the authors couldn’t seem to find any scriptural backing for this piece), but they are quick to note that SBC also opposes hormone therapy and gender affirmation surgery, as well as any legislative or cultural efforts to validate trans people as “morally praiseworthy.”

SBC’s policy arm, the Ethics and Religious Liberty Commission (ERLC), hosted a conference last month on “The Gospel, Homosexuality, and the Future of Marriage.” At the event, ERLC president Russell Moore—who was recently invited by the Vatican to speak at a conference on the “Complementarity of Man and Woman”—took the opportunity to offer advice to pastors ministering to trans people during a live “Questions & Ethics” session, saying “The people who are coming to you—that biologically male person who says ‘I think I’m a woman,’ or vice versa—that person really experiences that and believes that. … You don’t have to agree with that at all, and I would say we can’t. The Bible teaches us that God created us male and female.”

Focus on the Family explicitly opposes “the celebration of ‘transgenderism’ as one of God’s gifts.”

On its website, FOTF explains its position: “Because ‘transgenderism’ violates God’s intentional design for sex and sexuality, we believe that this is a cultural and theological battle that we must engage and win. The modern ‘transgender’ movement is systematically working to dismantle the concept of gender as the Bible and the world have always known it to be. If the transgender lobby succeeds, there will be striking consequences for marriage, family and society at large.” Those who fail to follow FOTF’s guidance are told, “[T]he problems associated with transgenderism, like confusion and pain, stem from a lack of parental involvement and guidance.”

The Alliance Defending Freedom (ADF, formerly known as the Alliance Defense Fund), a right-wing legal ministry committed to “religious freedom,” has recently taken up the cause of isolating and shaming transgender students. Arguing against a Massachusetts school’s 2013 decision to allow transgender students to access facilities and recreation activities that aligned with their gender identity, ADF’s Jeremy Tedesco warned the policy created “an atmosphere that could result in sexual assaults committed by minors.”

The Family Research Council, a right-wing lobby group based in Washington, DC, similarly argues that gender identity protections would “purposefully threaten the public safety of women and children by creating the legitimized access that sexual predators tend to seek.”

Concerned Women for America has warned its members that the Employment Non-Discrimination Act (ENDA)—legislation that would prohibit discrimination in hiring and employment on the basis of sexual orientation or gender identity—could force “Christian businessmen” to allow transgender employees to wear male and female clothing alternately, and could “open bathroom doors for predators throughout the nation.”

As Peter LaBarbera, president of Americans For Truth About Homosexuality, put it, “These bills or policies are gifts to predators!” [emphasis his].

Denny Burk, professor of Biblical Studies at Boyce College and co-author of the SBC’s anti-trans declaration, has warned that the trans justice movement is “the next phase of the LGBT revolution.” In actuality, the mainstream gay rights movement is already demonstrating a preference for other, international priorities in the post-marriage equality era.

Nonetheless, with leaders on the Right conceding defeat on the marriage front, we can expect to see them turning their sights toward other battlefronts, particularly ones they perceive to be winnable.

While it may seem that the trans community is that vulnerable, “winnable” target, what the Right doesn’t recognize is that the power of the gay rights movement—a movement that most would say has beaten the Right—was fueled first by trans women of color. These women—who find themselves at the nexus of White supremacy and heteropatriarchy—were fighting long before Stonewall, and they’ll continue fighting long after Gay Inc. closes its doors. They are fierce and formidable, and, as the Right will soon learn, they are undefeatable.