Why Black Lives Haven’t Mattered: The Origins of Western Racism in Christian Hegemony

Dominant Christianity developed categories of people labeled “Other” going back to the year 381 C.E when the Roman Emperor Theodosius declared that Orthodox Christianity would be the only legitimate religion in the Roman Empire. At that point all pagans, Jews, and Christian heretics lost their civil rights and became targets of systematic violence. In the succeeding centuries, and especially after the first Crusades, able-bodied and healthy European heterosexual males with wealth developed a sense of themselves as the only fully legitimate Christians. Muslims, Jews, Pagans, women, homosexuals, people with disabilities, and the poor were relegated to the category of Other—inferior, polluting, dangerous, and capable of being used by the Devil to undermine God’s work in the world.[i] As historian Winthrop Jordan wrote, “Christianity was interwoven into [an Englishman’s] conception of his own nationality…. Being a Christian was not merely a matter of subscribing to certain doctrines; it was a quality inherent in oneself and in one’s society. It was interconnected with all the other attributes of normal and proper men.”[ii] The major division in the west was between legitimate Christians and others.

It was in Spain during the 14th and 15th centuries, because of concern about the sincerity of Jewish and Muslim conversos (former Jews or Muslims who were forced to converted to Catholicism), that the church developed a theory of biological purity defining who was Christian. For example, Marcos Garcia preached in 1449 that:

“All converts who belong to the Jewish race or those who have descended from  it – that is, who were born as Jews, or are sons, grandsons, great-grandsons, or great-great-grandsons of Jews who were baptized … including those [converts] who descended newly and recently from that most evil and damned stock, are presumed, according to the testimonies of the Scriptures, to be infidels, and suspect of the faith. From which follows that the vice of infidelity is not presumed to be purged until the fourth generation.”[iii]

The racialization of Jews and Muslims soon became legalized under the concept of limpieza de sangre (blood purity).[iv] Jews and Muslims were believed to be separate races than Christians. Even if they converted, the church claimed the taint of their Jewishness or Muslimness took generations to become diluted and to disappear. The policy of the Spanish crown eventually became the complete elimination of all Jews and Muslims, and even of Christians who had a drop of Jewish or Moorish blood in their veins. It was the task of the Inquisition to turn Spain into a pure Christian society by eliminating all inferior races.

Throughout Europe – not just isolated to Spain – the Inquisition became a popular phenomenon orchestrated and enforced by religious authority and state power and with widespread public participation. Crowds of thousands would turn out for hangings, burnings, beheadings and various forms of torture, much as crowds of white Christians turned out for lynchings in the US centuries later. Many times, mobs would apprehend people accused of heresy and murder them on the spot, sometimes destroying entire communities of Jews.

This theory of blood impurity/racial inferiority was subsequently used to justify the inferior treatment, murder and enslavement of Africans, indigenous peoples in the Western hemisphere. For example, after Bacon’s Rebellion when Virginia decreed in 1667 that converted slaves could be kept in bondage because they had heathen ancestry, the justification for Black servitude changed from religious status to a racialized one.29

A series of Papal Bulls declared that Christian nations were free in law and by divine approval to lay claim to what were called unoccupied lands (terra nullius) or lands belonging to so-called heathens or pagans. Slavery was divinely sanctioned in these statements. Again the intertwined economic and religious motivation is clear. Slavery would be of economic benefit to the colonizers, but this was justified by their responsibility to convert and thereby civilize the enslaved people.

As Africans and Native Americans began to be converted to Christianity, such a simple distinction between Christian and non-Christian was no longer useful – at least as a legal and political difference. In addition, because Europeans, Native Americans and Africans often worked and lived together in similar circumstances of servitude, and resisted and rebelled together against the way they were treated, the landowning class began to implement policies to separate European workers from African and Native-American workers. Even in this early colonial period, racism was used to divide workers and make it easier for those in power to control working conditions. Drawing on already established popular classifications, whiteness, now somewhat separate from Christianity, was delineated more clearly as a legal category in the United States in the 17th century, and the concept of life-long servitude (slavery) was introduced from the West Indies and distinguished from various forms of shorter-term servitude (indenture). In response to Bacon’s rebellion and other uprisings, the ruling class, especially in the populous and dominant territory of Virginia, began to establish a clear racial hierarchy in the1660s and 70s.4 By the 1730s racial divisions were firmly in place legally and socially. Most blacks were enslaved and even free blacks had lost the right to vote, the right to bear arms and the right to bear witness. Blacks were also barred from participating in many trades during this period.

Meanwhile, whites had gained the right to corn, money, a gun, clothing and 50 acres of land at the end of indentureship. In other words, poor whites “gained legal, political, emotional, social, and financial status that was directly related to the concomitant degradation of Indians and Negroes.”[v]

Subsequently, slavery in the US became so widely accepted by Christian institutions, and so deeply intertwined with the economic interests of all whites, that for a long time it was dangerous to challenge. Few white Christians did so.

Some abolitionists used Christian texts to decry slavery, but they were countered by other texts sanctioning it, mostly written by ministers who, by one estimate, wrote nearly half of all pro-slavery tracts published in the US.[vi] Christian denominations, with only a few exceptions, supported slavery or claimed to be neutral. 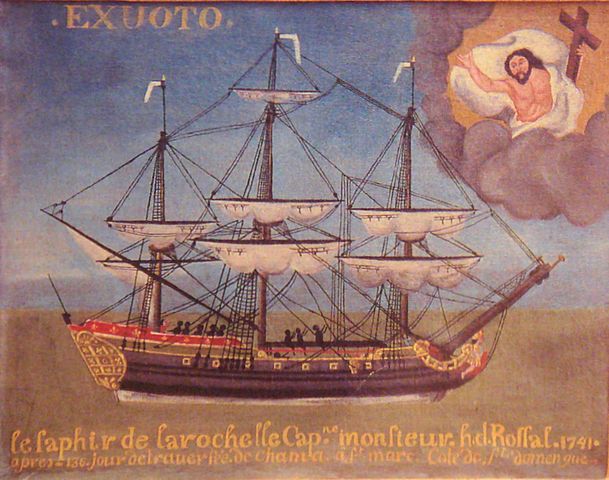 Christianity blessed slavery at every step of the trade. For example, in present-day Ghana,a small church for baptizing Africans before they were taken onto ships was situated above Elmina Castle’s slave pens. Many of the ships had names such as Jesus, Good Ship Jesus, Angel, Grace of God,[vii] Christ the Redeemer, Blessed, John Evangelist, The Lord Our Savior and Trinity.[viii] In the early days of the slave trade the Portuguese branded every woman on her right arm with a cross.[ix] As Frederick Douglas so concisely explained:

“Revivals of religion and revivals in the slave-trade go hand in hand together. The slave prison and the church stand near each other. The clanking of fetters and the rattling of chains in the prison, and the pious psalm and solemn prayer in the church, may be heard at the same time. The dealer in the bodies and souls of men … gives his blood-stained gold to support the pulpit, and the pulpit, in return, covers his infernal business with the garb of Christianity.”[x]

Eventually more Christians, including some denominations as a whole, joined the struggle against slavery. But even today, the lack of acknowledgment of and reparations for slavery continues to plague US society and the integrity of dominant Christianity. While slavery ended as a legal system after the Civil War, the enslavement of African-Americans in the US continued by another name, Jim Crow: a system of legal, social and economic bondage violently enforced, most notoriously by chain gangs, white race riots and lynching.

During the post Civil War era incidents of racial violence were sometimes spontaneous actions carried out by small groups of people. However, in the tradition of the Inquisition, more often lynchings were deliberate, organized, public Christian spectacles lasting days or even weeks. Flyers were printed, newspapers advertised them, and thousands attended, bringing families and friends, picnic food, cameras and buying memorabilia and souvenirs. Businesses closed down, public officials and church leaders were present and local police kept order.[xi]

Lynchings, as well as the white riots that murdered African-Americans and destroyed their houses and businesses (especially when they thrived) were a form of collective terrorism occurring periodically throughout the US. Just like witch burnings and Christian riots against Jews centuries earlier, they served to bond white communities to white Christian supremacy, reminding them as well what might happen if they protested its norms.

White Christian men are still in control and state-sponsored and sanctioned racial violence continues today in the form of police murder of African Americans and others, the disproportionate incarceration of people of color, lack of access to health care, educational and work opportunities, land grabs, residential segregation and gentrification, the elimination of communities of color from areas that whites desire to live in. The roots of racial and other forms of exploitation, discrimination, and violence today lie in the centuries of demonization of all those considered Other by dominant Christianity. The assertion that Black Lives Matter by African Americans and their allies is one current and powerful attempt to disrupt business as usual and claim full participation in our society. Now is the time for each of us to challenge this dominant Christian narrative because truly silence equals complicity.

Resources on #BlackLivesMatter can be found here.

Social justice books and resources from Paul Kivel can be found at paulkivel.com

[i] For more on the development of Christian concepts of the “Other” see Paul Kivel, Living in the Shadow of the Cross: Understanding and Resisting the Power and Privilege of Christian Hegemony (New Society, 2013 pp. 21-3) and Robert Ian Moore. The Formation of a Persecuting Society. Blackwell, 1987.

[iv] The Strictures of the Purity of Blood was adopted in Spain in 1449 and prefigured various laws defining blackness under slavery and operating in the US until the late 1960s, and also the Law for Protection of German Blood and Honor adopted in 1935. See: Jonathan Kirsch, The Grand Inquisitor’s Manual: A History of Terror in the Name of God. HarperCollins, 2008. p. 15 and Anouar Majid, We are All Moors: Ending Centuries of Crusades Against Muslims and other Minorities. University of Minnesota, 2009. p. 34.

10 thoughts on “Why Black Lives Haven’t Mattered: The Origins of Western Racism in Christian Hegemony”